“What advice would you give your former self?”

“I would tell my former self ‘be relaxed in the fact that you like to make people laugh’. When I started writing to perform I wanted to stay away from comedy because I thought it was less badass. Then, I realized that comedy is a part of who I am: my particular voice and style. I don’t have to do really serious and political stuff because the depth and seriousness will come out through the comedy.

I explore complex issues through comedy. I like to talk about the issues of growing up, nationality, sexuality, profession, and navigating adulthood. One of my poems “Texas I Can’t Bring You To Parties Anymore” deals with my complex relationship with my home state and the fact that I’m really proud to be from Texas but ashamed of some aspects of Texas. The poem works as an extended metaphor about a friend you know very well but everyone else thinks that friend is a total ass hole, even though you tell them that they don’t know your friend like you do; that your friend has some really sweet sides besides being a jerk. So, you can’t bring that friend to parties because that friend wrecks everything. It expresses my need to defend and also object to my home state, which is why I likened it to a friend whose personality is polarizing.”

“Is poetry in your future? What is the poetry scene like in Scotland?”

“I’m doing a masters in creative writing. I have a children’s book coming out soon. It’s a picture book with a long rhyming poem called I Love St Andrews. I’ll probably be writing poetry forever!

In Scotland the poetry scene is super vibrant. There are international poetry festivals that are drawing people here from all over the world as well as local Spokenword poets who are really talented and exploring many different themes in their writing.” 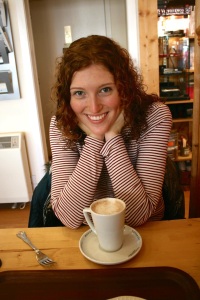